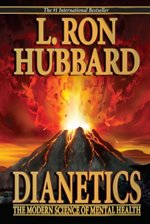 Order the book
that started it all

Order the book that started it all—Dianetics: The Modern Science of Mental Health. The explosive #1 New York Times bestseller contains all of the advanced techniques you need to apply Dianetics. Learn the procedure step by step and find out how your mind works and how to make it work for you.

Do you want to accelerate your speed to Clear? The absolute best way to immerse yourself in the Dianetics process is to attend a weekend Dianetics Seminar. This two-day seminar is the quickest, most effective way to master and apply the techniques of Dianetics toward the ultimate goal—the state of Clear.

ORDER YOUR KIT
Dianetics Around the World

Dianetics is the original mental health phenomenon that inspired the entire self-help movement. It has been positively and permanently transforming millions of lives for over six decades. Over 22 million copies have been sold in 160 countries and it has been translated into 50 languages. But it’s much more than a book, it’s an entire system that you can apply instantly.

Millions have experienced the life-changing results of Dianetics. You can too.

There’s simply nothing else that can give you the tools to take control of your life, empowering you to unleash your unlimited potential. Dianetics can change everything.

Start your own Dianetics adventure today.

Indisputably the most widely read and influential book ever written about the mind, Dianetics has remained a bestseller for over 50 years, with over 20 million copies sold.

Used in more than 160 nations, Dianetics brings dramatic and permanent improvement to people across every walk of life.

Get the Book
LISTEN 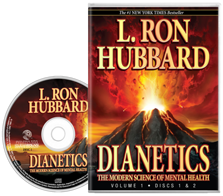 Dianetics is the most widely read and influential book ever written about the mind. This is available in audiobook format, including a full reading of the original work and an accompanying supplement with related materials and glossary.

Used in more than 160 nations, Dianetics brings dramatic and permanent improvement to people across every walk of life.

Here it is, concept by concept, a visual presentation of the book that altered the entire course of human thinking toward a better, saner world.

There is a definite goal in Dianetics—the state called Clear.  In this 2-disc DVD package, you’ll not only get a personal reality on what that state is and how it is achieved, but you’ll learn the techniques and procedures of Dianetics to be able to get rid of your own reactive mind, and help another do the same.  With four and a half hours of demonstrations and examples it is the most complete audiovisual, cinematic presentation of Dianetics available.  Combined with a study of Dianetics: The Modern Science of Mental Health, you will know how to apply all the principles contained in the book.

Get ready to start your Dianetics adventure. 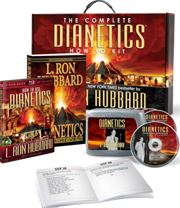 Own The Complete Dianetics How-to Kit. It contains all the information—the How-to-Use Dianetics and Aspects of Auditing films on Blu-ray and DVD, the famous Dianetics Lectures and Demonstrations (five CDs), the Dianetics Procedure Guide and the book Dianetics: The Modern Science of Mental Health—all in one easy-to-carry case.

This is the most comprehensive package of Dianetics materials that has ever been available to learn all the techniques and procedures of Dianetics. Every consideration was taken in its creation so that you have precisely what you need to be able to tackle the source stress, anxiety and self-doubt—the reactive mind.

Watch the films, read the book and listen to the lectures—know Dianetics fundamentals cold so you can apply them in life to help yourself and others.

Take a big step on your road to Clear and the stability, success and happiness you’ve always wanted.

Buy and use The Complete Dianetics How-to Kit today.

Get the How-to Kit

Locate a Seminar Near You
See the Agenda
What is Included